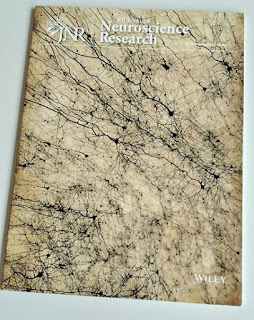 Making an image of the brain always is a challenge. The idea behind the cover image is to pay tribute to the amazing work initiated by Camillo Golgi back in the late 19th century. His discovery of a staining technique called black reaction changed the way one could visualize brain structures. Recent studies have shown that the aesthetic of images representing data visualization in neuro-science plays a significant role in the way those image are understood. In the last years, computer technologies have improved dramatically, together with the field of computational neuro-science. Thanks to advanced computer graphics techniques, it is now possible to reconstruct realistic shapes of neurons from a set of points and radii describing the structure of the cell. Many of those data sets for single neurons can be found on the web. Combining them together and placing them in space makes it a simple way to imagine what regions of the brain could look like if they were to be seen using Golgi’s technique. In the near future, it seems clear that realistic, physically based rendering of in-silico data will become a necessary tool to understand how the brain functions. But if those new tools are very promising, one should not forget the work of the pioneers, and this is what this cover image is all about.
on May 21, 2019